My interst of achimenes was awakened when this plant was given to me by my husbands Great Aunt, over 40 years ago. She had, had it for years, so I think it must come from Victorian times. It is an upright variety with a lovely spotted throat. Unfortunately I do not know the name of this variety. If anyone has any idea please email me. My address is on my all about me page.
I tried to collect different colours back then, but as they were not very popular I had great difficulty in finding them. However, over the past few years they have become popular once again and the old varieties were available to buy. Recently people have been hybridizing them, so new colours have appeared. Of course we now have the internet to find and order new hybrids.

I cannot remember the order I got the rest of my current plants. Quite a few were a Mothers Day present. I had circled a few I liked in a catalogue from a nursery that specialises in Gesneriads, for my daughter to choose from. She bought me every one that I had circled! I am a lucky mum.

Achimenes are commonly called hot water plants, they got this name because they need warm water to persuade the rhyzomes to sprout. They are from the same family of plants as African Violets, (Gesneriads).They were very popular during the Victorian times and recently have become popular again, with many hybrids and colours offered for sale. I have hybridized some myself and got some interesting variations from the same parent plants.
Here is my collection of species and hybrids that I have bought or been given over the years.

An image to show the range of sizes and shapes of the flowers I have.

This one I bought on ebay, because I liked the colour, but it is another unknown variety.

The following are the varieties that my daughter bought me.

A tall variety that needs a little support. The flowers are darker yellow when they first open and then fade to a lovely lemon, with a brown spotted throat. This is a hybrid from Little beauty x Flavia by Lyon in 1964

This one is an old Victorian variety. It is a species of Achimenes and not a hybrid. It was discovered in Mexico around 1840. 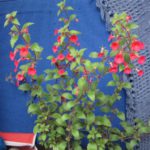 This is another species that grows wild in Mexico. It was originally known as Columnea erecta Lam. and dated 1786.

Once again it is a species from Mexico and the earliest date I can find is 1839.

Serge Saliba hybridised this in 2007.

Two years ago I cross pollinated some of my varieties to see what I would get. It is a slow process and I probably won’t see the resulting colour until the third year. The first year the seed was set and collected and stored until the following spring. The seed is finer than some pollens and looks like dust. I planted the seed, labeled it and waited for the seedlings to appear. I was lucky two of the hybrids grew and flowered last year. The others grew leaves, made rhyzomes and thenn went into their dormancy. Hopefully I will see the results this year. Here is a picture of the seed under a microscope, magnified 250 times. Followed by A1, A2, A3, A4 and A5 Hybrid. I will think of names for them later. A1 was a cross of Father pink and Mother Jubilee Gem. A2 Same parentage slightly different shape and colour. A3 Mother Jubilee Gem Father Salmon pink, A4 is an unknown hybrid it lost its label and A5 Mother Weinrot Elfe, Father Erecta.

2020 has been an exceptionally hot summer. Look what happened to A5.

This year I was able to buy some varieties that are usually hard to get in the uk. I was outbid on a few and then given a second chance to buy, which I did. 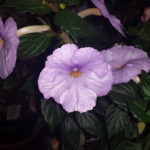 This is a hybrid with a stocky habit and thick stems with large flowers. earliest date I can find is 2010

Serge Saliba is an Achimenes grower and hybridizer from Romania. He has a photos of many of his hybrids on flicker. I already own lady in Black and have been after many of his colours. This year I am fortunate to have aquired a few. 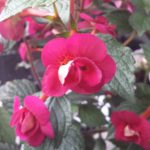 This is a double variety that he crossed with A. ‘Elegance’ x A. ‘Rainbow Warrior’. I have found it to be very free flowering and nice firm stems. An upright variety.

2020. This year I have fed the plants with weak Tomotorite every 2 weeks. Sun Wind has rewarded me with this beautiful display.

2020. This one has also rewarded my feeding with a beautiful display.

Once again two different types of flowers on the same plant. I wonder if it is temperature as they are developing.

A hybrid of Longiflora

I have managed to collect a few more varieties this year.

The first to flower is Ever Blue Hybridized by Serge Saliba in 2012. Photos to follow as they Flower.

Yellow English Rose: Created in 2012. Well this is an interesting one. Some of the flowers are lemony pink and the others Lemon and they are all on the same stem.

This is a species and not a hybrid. The earliest date I can find is 1853

A hybrid from Longiflora

Hot Spot 2012, an apt name for a yellowish bloom with deep pink blotches.

2009. Both flowers are on the same plant. Maybe I will update if there are any changes.

This is a species and has beautiful tiny flowers. I have found an early date of 1838. It is native to Mexico, Guatemala and Honduras.

I am wondering if this one was sold to me with the correct label as it doesn’t look like the images that I have looked up on line.

2020 has been a very hot summer, so a lot of my achimenes are coming out weird colours.